Logan Canyon Scenic Byway follows Highway 89 and the beautiful Logan River up to a pass with views of Bear Lake, a naturally-formed body of water that gets its turquoise color from suspended limestone sediment (earning it’s the nickname “Caribbean of the Rockies”).  Logan Canyon is especially busy in the fall when the leaves change on quaking aspens and three species of maples: boxelder, canyon/bigtooth maple, and Rocky Mountain maple.

Logan Canyon has two popular, but steep trails that lead to Wind Cave and the Old Jardine Juniper, the world’s largest Rocky Mountain juniper estimated to be at least 3,000 years old.  The 3.6-mile out-and-back trail to Wind Cave starts from a roadside pullout across from Guinavah-Malibu Campground and gains more than 900 feet in elevation.  Hiking to the Old Jardine Juniper requires a climb of over 2,100 feet along the five-mile one-way trail, which continues further into the Mt. Naomi Wilderness.

Trout fishing is a popular activity due to all of the rivers and streams in Cache National Forest.  Large mammalian species include elk, mule deer, pronghorns, and black bears.  Watch the skies above Logan Canyon for ravens and a variety of birds of prey.

The limestone arches of Wind Cave originally formed underground then were exposed when the Logan River cut its steep canyon.

Logan Canyon (Highway 89) and Ogden River (Highway 39) Scenic Byways are both paved.  We did not drive any unpaved roads, but we did notice that the dirt roads around Bear Lake Summit (on Highway 89) looked very rutted and four-wheel-drive only.

There are numerous campgrounds along both the Logan Canyon and Ogden River Scenic Byways.  We did not notice any dispersed campsites in these areas, although there probably are some options in more remote portions of the National Forest.

Explore More – In what year did the Cache Valley host the second-ever rendezvous of fur-trapping mountain men? 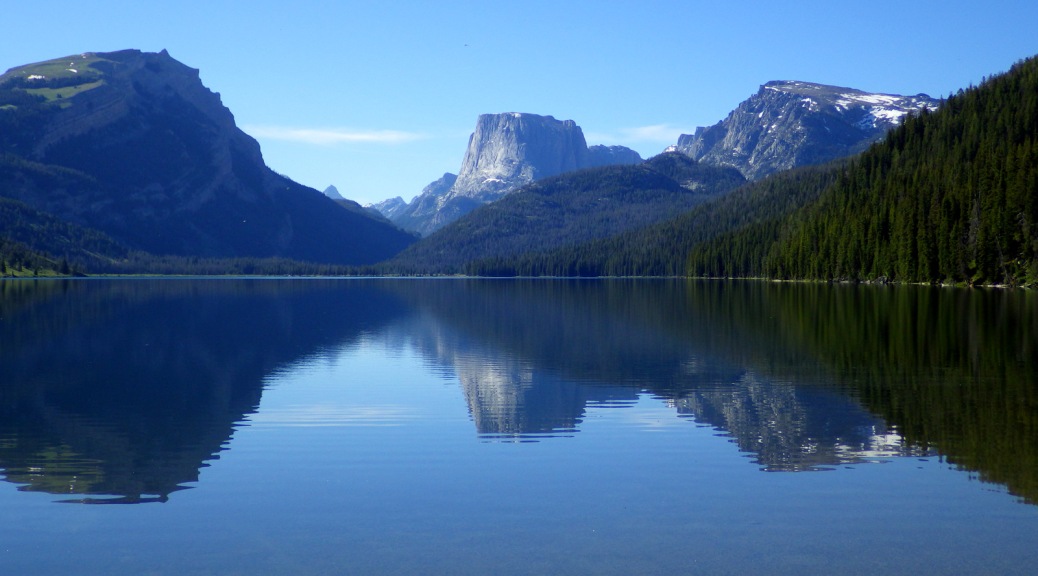 Thank you to everyone who attended our presentation last night at the library! If you couldn’t make it, please check out the short video we made to explain our quest to hike in all 155 National Forests (and learn more in our newspaper articles).

Please find below a gallery of the Powerpoint slides that ran before the presentation. And if you haven’t already, please check out our new guidebook to the National Forests.

We look forward to sharing more about National Forests in the future on this website.

The peaks of the Wind River Range not only represent the Continental Divide, but also a division between Bridger-Teton National Forest and Shoshone National Forest which happen to be in two different U.S. Forest Service Regions.  These mountains are our favorite place to go backpacking in the entire world with jagged peaks that rival the Teton Range for picturesqueness and a fraction of the visitors (except at overcrowded Titcomb Basin and the Cirque of the Towers).  Read more about our 120-mile trip on the Highline Trail in our newspaper article.

From Pinedale, Wyoming, a 50-mile partially-paved drive leads to the campground at Green River Lakes, which opens up into a beautiful valley that frames photogenic Squaretop Mountain.  Hiking around the northerly of the two lakes makes a great couple-hour jaunt, but if you are looking for a unique destination add the two-mile spur to fascinating Clear Creek Natural Bridge.  Here the water pours through and continues to widen a four-foot tall gap in the limestone.  Starting from the campground, the Highline Trail is a 72-mile one-way trek popular with backpackers.  The first ten miles are very flat following the river to Beaver Meadows, which offers 360° mountain views.

Further south in the Wind River Range than stunning Squaretop Mountain, it is only eight miles from Big Sandy Trailhead to the Cirque of the Towers, which is famous among rock climbers and actually in neighboring Shoshone National Forest.  Even though there were a lot of campers back there, we found a secluded spot between Big Sandy Lake and Clear Lake in Bridger National Forest.  When we finally made it over 10,800-foot Jackass Pass to the cirque, it was full of fog and hail was dropping from the sky.  Although we have been back on a sunny day, that was the more memorable experience, which is why we selected a photo from that morning for the cover of our new guidebook Out in the Woods (see bottom of this post).

On the way to Green River Lakes outside Pinedale, Wyoming, make time for a quick stop at Kendall Warm Springs where the water is a constant 85°F but is protected from human bathing.  The main attraction is a fish less than 2-inches long, the endangered Kendall Warm Springs dace.  During spawning (which occurs frequently throughout the year due to the warm water), the males turn purple and the females light green.  U.S. Forest Service biologists keep careful track of the population and if you’re lucky, you’ll meet them when they are out there conducting a survey.  On the trails and roads, keep an eye out for moose, elk, mule deer, pronghorns, both black and grizzly bears, and badgers (even in the middle of the day).  Trout fishing is also a major attraction to this area’s many lakes and streams.

This incredible view of Squaretop Mountain and Green River Lakes is at the end of a long drive down a washboard dirt road; maybe that is why it is on the Wyoming license plate.

The long dirt roads back to the trailheads at Big Sandy and Green River Lakes are well maintained, and we have never had a problem accessing them in a passenger vehicle.  Limited parking when you get there is the bigger problem.

The campground at Green River Lakes has an incredible view of Squaretop Mountain (which is on the Wyoming license plate).  There are more dispersed campsites on the road to Big Sandy Trailhead than Green River Lakes.

Explore More – What is the entire length of the stream that is the only place where the endangered Kendall Warm Springs dace lives (before it pours into the chilly Green River, home to a genetically distinct dace population)?

Out in the Woods: An Introductory Guide to America’s 155 National Forests introduces readers to the diversity of forests across all of America by providing a straightforward introduction to each National Forest, an easy hiking trail that is representative of that forest, and a tree species that can be found there.

We are also giving a presentation on recreating in National Forests at the Laramie County Library in Cheyenne, Wyoming. It will be in the Cottonwood Room (1st floor) at 7 p.m. on Tuesday, June 21, 2022. We will have all of our books for sale before and after the talk and would be happy to sign them for you.

If you go to our book page on Amazon (https://amzn.to/3LSeey2) click on the cover image to Look Inside and read the introduction. Below is an example of the layout for all 155 National Forests.

Check out our Shop tab for all of books and products!

Sawtooth National Recreation Area claims some of the most incredible mountain scenery in the heart of Idaho and spreads across Boise, Salmon-Challis, and Sawtooth National Forests.  According to a U.S. Forest Service publication, the 217,088-acre Sawtooth Wilderness claims the cleanest air in the continental United States, and it also contains over 270 miles of trails so there is plenty to explore.  In addition to the jagged peaks in the spectacular Sawtooth Wilderness, in 2015 President Obama signed the Sawtooth National Recreation Area and Jerry Peak Wilderness Additions Act creating three new Wildernesses that cover an additional 275,665 acres.

On our first drive north on Highway 75, we were not prepared for the beautiful mountain views once we summited 8,701-foot Galena Pass.  It was also a good observation point for a wildfire burning alongside the highway.  The date it ignited was July 4th, 2014 and it was burning near Fourth of July Creek, so naturally it was named the Hell Roaring Fire.  According to Inciweb it eventually closed the road and burned 325 acres.  Once through the smoke, we had great views of the Salmon River Valley on our way to scenic Redfish Lake, which is named for the endangered sockeye (or red) salmon that travel 900 miles and gain 6,500 feet in elevation to arrive here for spawning.  The lake also has chinook (or king) salmon and kokanee salmon (landlocked sockeyes that are not anadromous).

From Iron Creek Trailhead it is 11 miles roundtrip out-and-back with an elevation gain of 1,700 feet to access Sawtooth Lake.  As we hit 8,400 feet in elevation, the ponds were still predominantly frozen over and covered in snow.  We were initially disappointed, as we had originally considered stopping halfway up the trail at deep blue Alpine Lake thinking nowhere could be prettier.  Then we rounded a bend and realized we were wrong.  Our first view of Sawtooth Lake was a soul stirring sight (see Instagram-worthy Photo below).  A surprisingly warm night revealed an incredible firmament above snow-striped mountain peaks that seemed to glow in the dark.  In the morning the quiet here was profound, broken only by the occasional peep of a pika scurrying through the talus slope.  We found it hard to say goodbye to such a picturesque and revitalizing place.

On our first visit to Sawtooth Lake, snowy Mt. Regan was lit by the setting sun and reflected in open leads in the ice, glassy still but for the occasional ripple of a rising trout.

Late summer after the snow melts

The side road to Redfish Lake is paved and access to Iron Creek Trailhead was doable with our low-clearance passenger vehicle.

The shores of crystal-clear Redfish Lake have a lodge and four of the most scenic campgrounds in the country.  Stanley Lake and Alturus Lake also have popular campgrounds.

Craters of the Moon National Monument and Preserve (Idaho)