At the mouth of the Chesapeake Bay near Yorktown, Virginia, there is a brick fort so large it puts all others to shame.  It was held throughout the Civil War by the Union Army, hosting President Lincoln multiple times and providing a refuge for escaped slaves.  Following the War Between the States it served as a prison for Confederate President Jefferson Davis (his cell is contained within the Casemate Museum).  The fort was not decommissioned by the military until 2011 when it was declared Fort Monroe National Monument, though it still contains private residences.

Casemate Museum, Building #50, moat you can drive over

After you visit the Casemate Museum, walk around the ramparts and the parade ground with its countless live oak trees, including the 500-year-old Algernourne Oak.  Nearby Outlook Beach is popular for swimming, as is North Beach which is also part of the National Monument.

There is a self-guided walking tour that passes Building #50 (the house President Lincoln stayed in) and the Algernourne Oak.  Watch for traffic when you cross the moat through the East Gate.

The author Edgar Allen Poe served here in 1828, so you can pose with him and his raven inside the Casemate Museum. 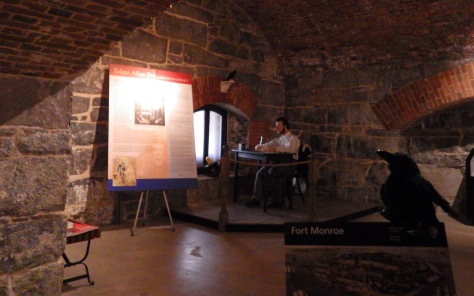 Open year round, though the summertime brings more tourists to the Yorktown Peninsula.

None to walk the grounds and even the Casemate Museum is now free ($3 for guided tours).

All roads paved, but be aware that most moat-crossing bridges are only one lane wide.

None in the monument which is filled with private homes, but there are several private campgrounds in the area. 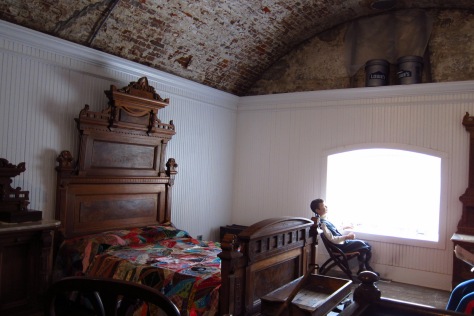 Explore More – The fort was completed in 1834 under the supervision of which famous Civil War General (then a Lieutenant)?